My Disagreement with Fischer Black

"What you risk reveals what you value." 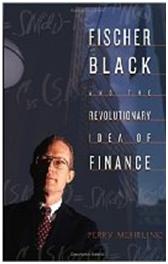 I never had the opportunity to meet Fischer Black, the canonical first "quant" (though he was far more than that), but we did exchange emails in July, 1995. It started when I was supposed to be studying for a course in measure/probability at the University of Minnesota library. However in the frequent and sometimes fervent desire to avoid what I should've been doing, I found myself reading what I recall was a Journal of Derivatives article by Dr. Black. In this post, I describe a regrettable shortcoming among finance practitioners today related to that email exchange.

In the article, he was mentioning something about an adjustable rate mortgage pool with a more stable value, and hence, lower risk than a fixed rate pool. At the time I was also working as a financial advisor to states and local governments and from that experience, I knew that there were at least certain economic actors that didn't view variable or adjustable rate instruments as less risky than fixed rate versions. This was particularly so when those securities were liabilities. So I emailed Dr. Black and as cogently as possible tried to ask my clarifying question about risk. I wondered whether or not a homeowner would think of an adjustable rate mortgage in that pool as less risky than a fixed rate alternative, particularly in an inflationary economy.

Risk is undoubtedly a curious animal. Any creature that exhibits non-linearity the way risk does, where 1+1 might equal anything between 0 and 2, is naturally unsettling to the uninitiated. But isn't risk, akin to beauty, appropriately viewed in the eye of the beholder? The trivial example of variable rate bonds I think illustrates the point.

The value of (theoretically continuously resetting) variable rate bonds, no matter the interest rate environment, is par. To most quants, if there's no price movement in a security or portfolio than they must be riskless. That is, quants traditionally if not religiously tie the concept of risk to the potential price variation of an instrument portfolio. Certain GAAP/accounting guidelines reinforce this perspective which happens to be a hotly debated topic these days. The folks at RiskMetrics call the places where price volatility reign "financial environments." These are places like banks, mutual funds, insurance companies; not coincidentally where lots of quants have jobs.

Contrast this view with those of a company CFO or treasurer who's managing one or more series of variable rate bonds or other floating rate securities. In this context the bonds are liabilities (or assets with a minus sign). That the prices of these securities are stable to the investor is little consolation to the CFO whose bonds are resetting at 15%. In this financial economy, that particular CFO is likely very happy with her/his fixed-rate obligations despite the fact that the quant would label the fixed-rate bonds as the risky securities. The CFO has been trained cash is king; that the value of your variable rate bonds stayed at par from time of issuance all the way to today matters little in front of the bankruptcy judge. And bankruptcy is unfortunately what happens if nominal interest payments to debt holders could no longer be satisfied. These settings are corporate environments, where earnings and cash flow are driving considerations.

In short, I'd have to respectfully disagree with Dr. Black if he intimated that we all should think about risk only in present value terms. In our political economy, nominal cash flow variability often drives real risk that should be understood and considered. The unfortunate truth is that much analytic focus has been placed on problems that exist only in financial environments, largely because of the widespread adherence among quants to the same view expressed by Dr. Black. Not nearly as many tools are available to those trying to navigate corporate environments.

Does this mean that corporate environments don't have challenging cash flow or earnings problems to solve? Are these problems somehow unworthy of high quality, data-driven analytics? I think this question is answered well in a recent Sep08 Harvard Business Review article. Its contents are ones with which I totally agree. What do you think?