The ‘Formula that Killed Wall Street?’ or ‘Know A Bad Rate Model When You See It’

"Copulas are generally an early doodling activity in an area." - Anonymous Street quant

Conducting hundreds of interviews with quants and other market players, a couple of fellow Scots from the University of Edinburgh have produced an excellent paper called ‘The Formula That Killed Wall Street?’ which illuminates some of the details surrounding the evolution of and role played by the Gaussian copula model in ABS markets in the crisis. It nicely explains in lay terms the difference between no-arbitrage models that traders use to value trades and create hedge strategies, and arbitrage/econometric models which may be used to actually estimate and manage naked risks (like issuing debt). Though it’s not exactly Tom Clancy, it reads extremely well to a fixed income savvy audience and is about as juicy as you’ll find for a chronicle of the impact of a financial modeling culture on markets and the economy.

A friend of mine in financial services asked me what a “copula” was about 5 years ago.  At the time I gave him the academic answer, which was all I really had. It’s simply a statistical way to model the behavior of random variables individually while separately inducing an interrelationship, or correlation. This obviously has resonance when thinking about the relationship between assets in a pool. Interestingly (or morbidly) the person credited with discovering copula’s applicability to finance originally noticed the similarity to a life insurance problem. What insurance companies found over time was that the death of one spouse led to the death of the surviving one much faster than simple life expectancy tables might suggest. They even had a term for this, the “broken heart syndrome”.  This has natural parallels to the likelihood of default by a company increasing if a company in the same or similar industry also goes down. As an aside, the next time someone asks about the cause of the financial crisis, you can just say it was a systemic misdiagnosis of the broken-heart syndrome as it applied to US residential real estate - we were all married and apparently didn’t know it.

But here’s the bottom line as it relates to the article: in the evolution of all manner of ABS markets in the 2000s but particularly ABS CDO, it wasn’t the Gaussian copula model itself that caused the damage, but rather a misunderstanding of the application for which it was used. Quants and traders on the Street used the Gaussian copula to determine valuation and hedging strategies and extract risk-netural probabilities of default. This was partly to justify to auditors their desire to book the entire spread on trades upfront i.e. to create “day 1 P&L”.  This of course maximized current year compensation for salespeople and traders. This did contribute to losses, but it didn’t bring down the proverbial card house. The real damage, the authors contend, was done by the rating agencies trying to use the same Gaussian copula model to actually evaluate credit risk and true default probability but calibrating only with a very benign period of historical data on real estate. This coupled with the pervasive use of ratings in corporate governance for investment policies, led to a very structured market that was at once attractive and growing but also detached from any rigorous, thoughtful analysis. Frankly, the most intensive analysis was done by those trying to game the rating agencies’ published models to achieve the highest credit ratings for new ABS using the cheapest (and least creditworthy) collateral.

So what’s this all got to do with public finance? We contend that the very convenient model 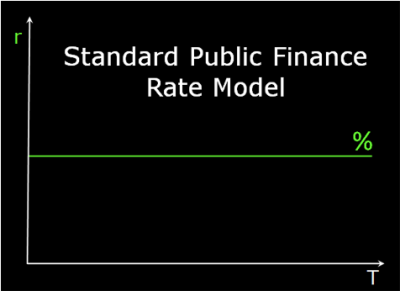 for variable rates of interest so often used in public finance modeling (shown at right) is simply dangerous. This model is used to make all manner of complex decisions related to capital structure strategies and long-term market risks. And unfortunately it plays to one of the best documented and worst characteristics of our species, overconfidence. With so many fantastic tools available to let variable rates actually vary when we structure public finance bonds, swaps, and investments, why suffer the dreaded “straight-line syndrome”? It may not lead to a broken heart, but why risk it?