The Big BAD Mistake about BABs

"Prediction is very difficult, especially if it's about the future."

Lots of people seem to be making a big mistake analyzing Build America Bonds (BABs).  The popular and straightforward analysis is to compare yields on traditional fixed rate bonds (or "BOBs" as I call them - Boring Old Bonds) to the after-subsidy yield on BABs.  Here's an example: 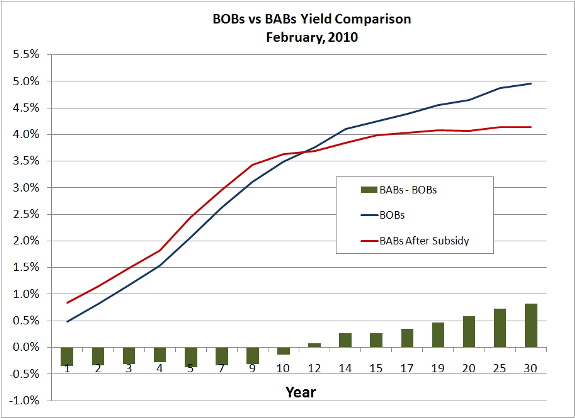 The (overly) simple analysis says that BOBs are the cheaper cost of capital through about year 12 and then BABs are the way to go thereafter.

The heroic simplifying assumption of course that works so nicely in spreadsheets and standard software packages is that this line-item Federal subsidy duck will stay staticand not shot down over the entire life of the bonds.  Is this a good assumption?   Let's look at some facts:

-     The BABs subsidy is qualitatively very different than the one inherent in BOBs.  As anyone dealing with a government budget knows, there's a fundamental practical and political difference between revenue lost in the opportunity sense (BOBs) vs the Treasury needing to cut a check for a subsidy as with BABs

-     The US debt and fiscal imbalance are ugly. Some argue worse than they've been excluding WWII

With these facts, is it prudent to be overly optimistic about this US subsidy staying static over 20-30 years, through changing administrations, congressional seats and political winds?  I don't think so.  In fact, the analysis of this risk is not unlike the oft-discussed "tax risk" that people cogitated about when evaluating synthetic fixed-rate borrowing strategies using LIBOR swaps.

Putting a finer point on it, when an issuer sells BOBs the following risks are shifted to the investor:

1)   Interest rate - rates go through the moon, the investor suffers the MTM loss. The nominal cost of capital for the issuer is locked in.

2)   Credit - should the issuer's credit deteriorate, again the investor suffers

3)   Tax law - should the US become less reliant on income taxes and more on consumption taxes or VAT or shifts to a flat tax, the preference for tax-exempt income would fall and investors would suffer losses.

For BABs, the third item no longer applies.  The investor gets a taxable coupon.  Has the third risk gone away entirely?  I think it's been transformed.  That third "tax law" risk is now replaced with US Fiscal Policy Risk (FP RiskTM) which I would argue is significantly non-zero and different qualitatively then we've seen before in the tax-exempt markets.

So if we're NOT to assume that this subsidy will stay static, and now the issuer has this new FP Risk to manage, how can this risk be incorporated into decision-metrics in a non-trivial way?  After all, what gets measured gets managed.  What do you think?