Hey, We had a Tax Event!...and a Century of Top Tax Rates

"What is the difference between a taxidermist and a tax collector? The taxidermist takes only your skin."  - Mark Twain

Last week a real, live, honest-to-goodness “Tax Event”, as described in thousands of financial contracts and securities documents happened. This particular tax law change is likely not of sufficient magnitude to actually trigger the various remedies that your run-of-the-mill Tax Event provision lays out, but with tax reform talk still swirling it’s probably not a bad time to reflect on what those provisions might actually mean financially for borrowers.

Tax risk in public finance circles and in contrast to a “Tax Event”, is that oft-discussed yet stubbornly nebulous chance that a change in tax law might ultimately raise a borrower’s financings costs. Many mistakenly believe the prime example of this occurs when the interest rate component of a tax-exempt variable rate bond or floating rate note (pricing off of or indexed to SIFMA) is hedged with a LIBOR-based swap.  People often think this somehow adds tax-risk to a borrower’s portfolio.1

3)      As a consequence of 1) above, drive the deterioration of any tax-exempt/taxable relationships on the balance sheet such as short duration taxable investments hedging tax-exempt VRDBs.

What’s the present value impact of the above to the borrower? Given the sensitivity, that depends on how many variable rate bonds exist on the balance sheet today, and also how much debt is expected to be issued in the future. Great tools do exist to get a read on this type of exposure.

Obviously difficult to say how it all shakes out, but needless to say the uncertainty is spooking both borrowers and investors alike. In the meantime, we’ll just update our marginal tax rate chart with 2013 info (assuming no additional legislative changes) giving us a full century of data. 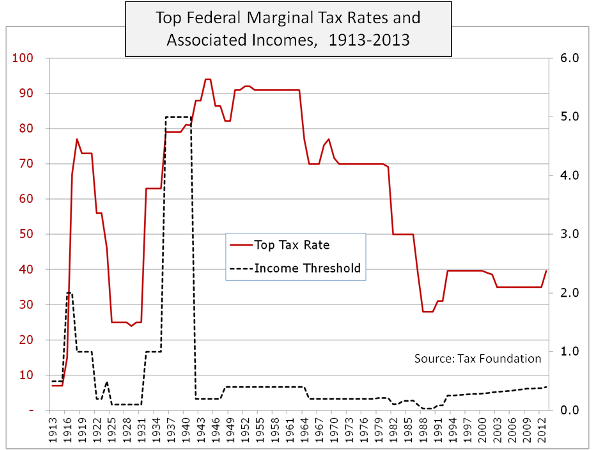 The left vertical axis (red) is the marginal tax rate in percent and the right vertical axis (black) is the income level at which the top marginal rate applies. Interesting to note that in the lead up to and during much of WWII there was a top FMTR of nearly 80% but it only hit annual income over $5 million. Adjusting for CPI that would apply to earners today pulling in over $82 million!  Any guesses how many people take down that kinda green today?

1This mistake has risen even to the level of the audited financials of very large cities. Auditors have erroneously stated that synthetic fixed LIBOR structures somehow have a tax risk element in them that doesn't exist in plain VRDBs. Those audits introduce some legal risk with statements like that!